The first portable audio devices were released under the Phonak Alpina brand in 1950, establishing their 70-year foundation of knowledge and experience.

A leader in the development of wireless communication, Phonak applies their expertise to their hearing devices with the philosophy that “life is on.”

Phonak has been our “go-to” company for FM systems for years. In 2013 they introduced the Roger System that allows Roger microphones to stream directly to hearing aids. Use of Phonak’s Roger accessories improves speech understanding in groups and in noise. It is unique in that several microphones can be used at the same time.

We find Phonak has great technology for people who need something a little different. We like their BICROS hearing aids for people with single-sided deafness and their Roger accessories for use in challenging environments.

Visaton Super was an Phonak innovation in 1967, creating glasses with integrated hearing aids. Additional firsts included the world’s first BTE (behind-the-ear) hearing aid (Phonette) in 1970 as well as the audio input technology upon which FM devices were based.

PICS, the first digitally programmed hearing aid with an analogue processor, was released by Phonak in 1992, followed closely by their AudioZoom multi-microphone concept in 1994, and the first tiny FM receiver, MicroLink, in 1996.

After launching SmartLink (Bluetooth integration technology) in 2003, Phonak has focused on developing bionic systems with the latest in digital technology for natural, effortless hearing with Binaural VoiceStream Technology that improved sound distinction by up to 45% in challenging noise environments.

The water-resistant housings were introduced in 2008 and the use of nano-digital technology made it possible for Phonak to produce the world’s first extended wear product, Lyric, in 2011.

These doctors go above and beyond to ensure an excellent experience for patients. I recommend them without hesitation.

- Kamal E.
These folks are courteous and competent. They have been a huge help in improving my mom’s hearing life. Thank you!
- Mark B.

Knowledgable. Patient. Friendly. Willing to thoughtfully and carefully answer whatever questions you have. Clearly patient-focused. Committed to education. I feel lucky to have found this excellent team of helpers. 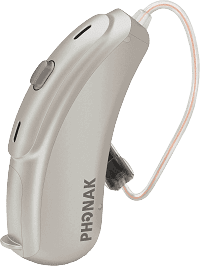 Phonak’s remote support from the myPhonak app plays a significant role in improving hearing aid functionality without the need for an office visit. Along with connectivity capabilities, your hearing instrument specialist can adjust programming for your device from a remote location.

The advanced hearing technology solutions available from Phonak are among the great tools we have available to help meet your hearing care needs, but you remain the primary focus of the personalized hearing care provided by Pacific Hearing Service.

Using comprehensive hearing assessments to accurately identify your hearing challenges, our team is eager to help you select the hearing instrument best suited to meet your hearing care needs, your budget, and your personal preferences. We take things a step further, offering ongoing technical support and maintenance along with hearing aid repair from major manufacturers like Phonak, Audina, Persona, Siemens, Unitron, and many more.

Supporting you with your hearing instrument, whether you purchased it through us or somewhere else, is one of the ways we help Silicon Valley hear better and enjoy a more rewarding and independent lifestyle. To learn more about hearing aids and hearing care at Pacific Hearing Service, contact us using the adjacent form so one of our specialists can call you back.

Have a question? We’ll call you!

Simply request a callback through this form, and we’ll call you for a short and friendly no-obligation conversation to answer your questions and offer our expert advice.